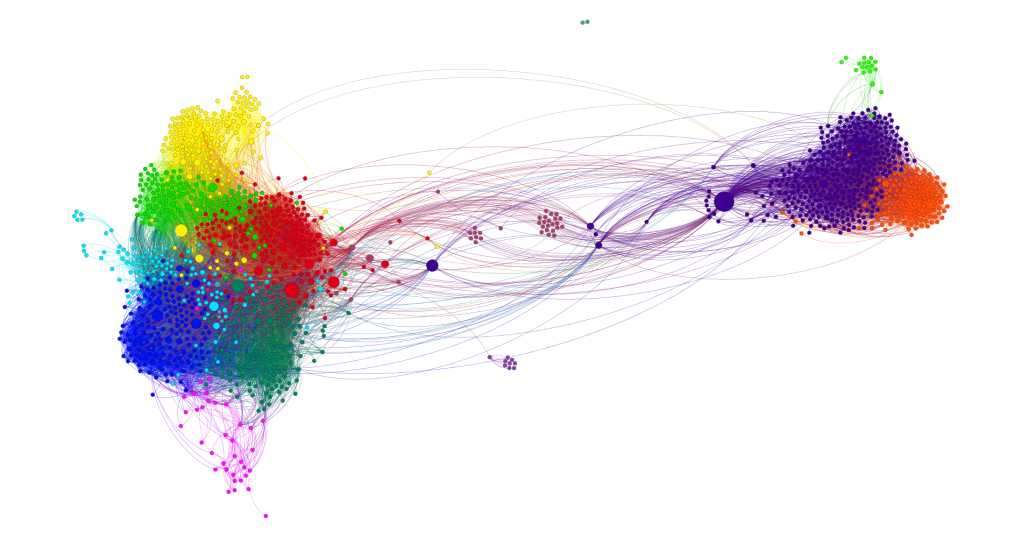 Originally posted during the summer of 2012, while I was studying abroad in Bonn, Germany.

I already spent way too much time on this to keep it to myself… I should have been working on my research project, but for the second night in a row, it gets really late without me noticing the time go by. As geeky as it might be, here goes!

After running into the graph of ideas, I was tempted to do some analysis of my own and graphed out my Facebook network using Gephi and this nifty app. Each circle represents a contact in my network, and each line a Facebook friendship. The size of the bubbles represents how well connected someone is to everyone else in the network. The only input data that the program gets is which of my friends are friends with whom in my network: mutual friends. From there, the program uses several advanced algorithms to automatically cluster, arrange and color the nodes in the most logical sense. Some interesting results came out after playing with the variables.

I will now try to describe what each group represents more or less, remembering that there is a great overlap between the groups, mainly in the bigger cluster on the left. There are many exceptions around the coloring and placement of nodes, given that the algorithm is not perfect, but the exercise is still valuable.

The most notable divide is the left and right blobs, which respectively represent people I met before and after getting to NU.

On the left blob, there are 7 main clusters

As we go to the right, isolated and smaller groups appear. The light purple group that shoots downwards and to the center of the picture are the people who I met during my trip through Europe two years ago. The two maroon-ish groups on the very center are the people I met during my trip to Israel in 2007, I guess they didn’t have anything to do with either Costa Rica or the NU community, but still were connected to people in both. Above, you can see a lone pair of nodes far away from anything else, two girls I randomly met during a party last month in Tel Aviv.

Now if we keep going to the right, we get into the purple NU territory. There are some key players here and expectedly the main links between both sides of the network are my Latin American Jewish friends at NU, some of whom I’ve known for years. The orange group at the far right is very well defined by my fraternity brothers, their girlfriends and some other random people who somehow ended up there. Most curiously, the green group on the top right are the people I am sharing my time with here in Bonn, some more connected with my friends from college, and some less, but still separate from the general NU crowd.

Its amazing how this program could tell so much about myself with so little information. I am very interested in the subject of data visualization and network behavior, and right now I don’t have much time to learn about it, but in August I will probably devote part of my time to this kind of things.

Try to understand your own Facebook network with Gephi by using this great tutorial!