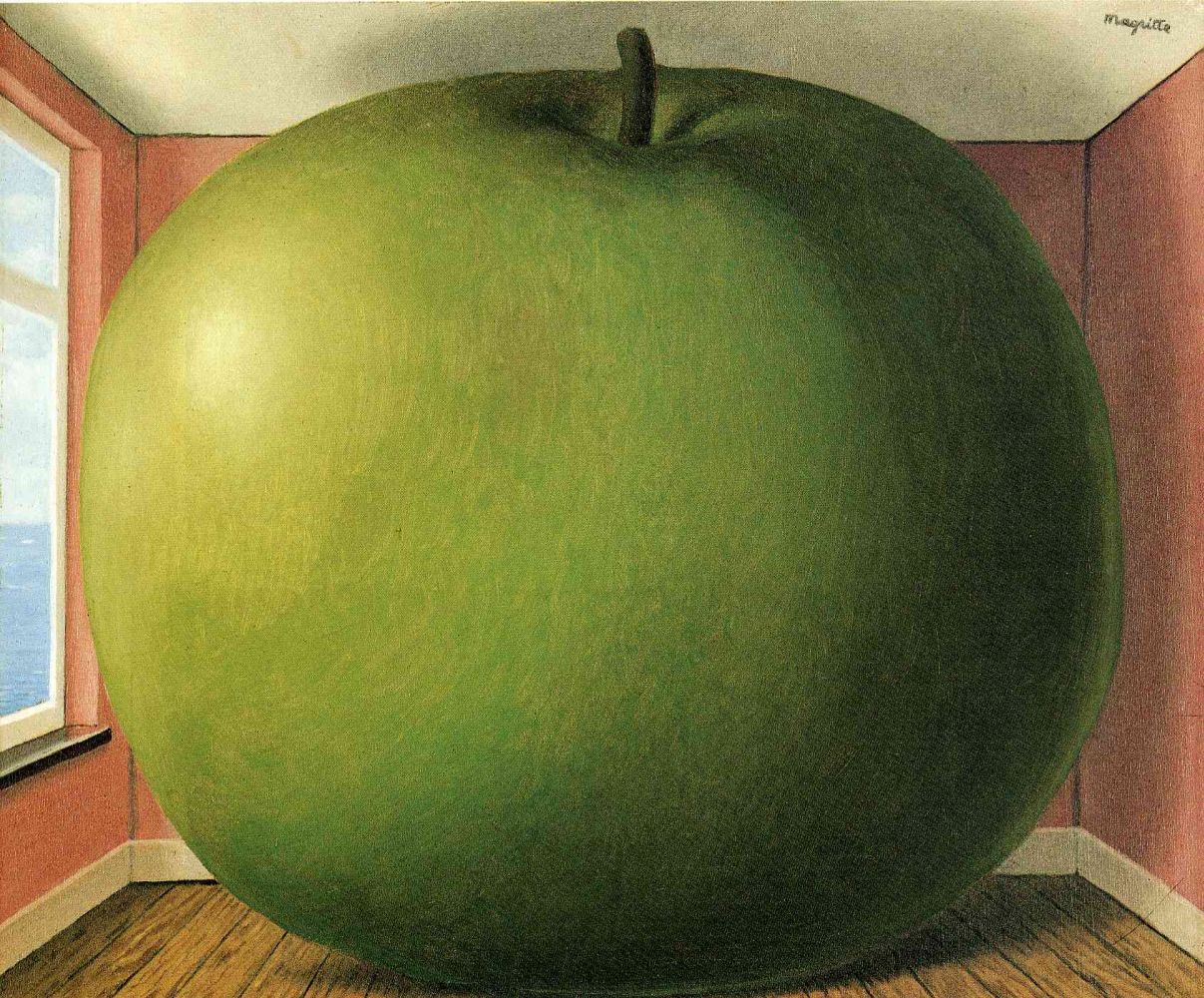 I’m not sure how I found Magritte in the first place, but as a teenager, his Son of Man became my avatar on every online platform where I spent afternoons and evenings during the mid-aughts. I pondered endlessly on his playful compositions, full of contradictions, false premises, and recursive repetitive themes. The motifs in Magritte’s art — paintings within paintings, windows confounding what was inside with what was outside, ambiguous and impossible light sources — invite us to question the automatic assumptions we make about what is in front of our eyes, the nature of reality, and what the objects we interact with on our daily lives actually represent. Images are treacherous, etc, etc.

This weekend I had a chance to think about these things once again (with fresh eyes, and with a few more years of experiences behind me) at SFMOMA’s “Magritte: The Fifth Season.” While I was familiar with many of the pieces presented in The Fifth Season, a pair of images I did not remember seeing before hit close to home. The Listening Room (1952) and its remake bearing the same name, The Listening Room (1958), were displayed in a room together with the better known Personal Values. In these three pieces, the viewer is presented with incongruously large everyday objects: a wine glass the size of an armoire, a comb larger than the bed it sits on, apples that take up whole rooms. These are surreal images, which evoke an eerie, frightening effect the longer you look at them. The artist asks us to question whether what we see is really there, and, perhaps most importantly, makes us wonder what’s not shown, what’s hiding behind these disproportionate objects.

Not to be too literal, but my brain quickly locked onto the engorged apples of The Listening Room as representations of Apple and the growing effect my job there has had on who I am, how others see me, and how I see myself. You might have heard me say before that I landed at Apple by chance - that I was trying to go down the startup route, and instead ended up joining one of the largest corporations in the world. Opportunity showed itself, and it seemed too good to pass up. For better and for worse, the decision has defined me and will continue to do so whenever I decide it’s time for whatever comes next.

In organizational behavior theory, it is well understood that a company’s culture, enshrined in its processes, its jargon, and its incentive structures, is ultimately embodied in its people. In a recent Twitter thread Keith Rabois argued that the cachet of a company’s founder being an ex-Googler has changed over time, and how people who land PM roles there learn the wrong lessons for when they quit to start their own companies. The stemming conversations made me wonder about the lessons I’ve learned during my tenure at Apple, which, crazily, is reaching three and a half years now. In my case, by learning to navigate Apple’s corporate life, I’ve picked up its habits and its way of approaching problems. I’ve even warmed up to its siloed functional structure and was surprised when I found its DRI model is not shared in other organizations.

Expanding that circle to not just concepts I’ve incorporated from Apple, but to Silicon Valley’s tech culture at large, I am continuously amazed by all the ways in which the technology we build is broken, an idea diametrically opposed to the techno-optimism that surrounds me. This thought takes an outsized amount of space in my head, and I come back to it often. I’m convinced that it’s only due to the miracle of emergent behavior that anything works, and that any company can build something that, at least temporarily, works. If engineers at Apple, Google, FB, etc, with all that supporting infrastructure, have so much trouble making things work, how are people who don’t have these tools at hand able to solve problems? Obviously this is hyperbolic, and there are uncountable ways in which being constrained, and in which not having said tools is an advantage, but the longer I spend at Apple, the more this feeling of learned helplessness takes over me. That makes me worry. I have habits to unlearn.

Seeing how the beast works from inside and absorbing the lessons of how it cracks its challenges continues to be fascinating. I’m sure some of the practices that led to its success have rubbed off on me and will come in handy in the future. However, I am afraid that, much like Magritte tricks us with The Listening Room’s apples, I’ve tricked myself into thinking that these ideas (the Apple way of solving problems, my opposition to Silicon Valley’s all-encompassing techno-optimism, etc) take up room in my identity and the stories I tell about myself. My most direct environment has taken up the room that should be inhabited by other ideas - ideas that I’ll need when I start building something of my own - so I’m trying to be more thoughtful about what ideas to keep, and what to discard. Unlearning things is hard, though.

The Listening Room is not about the apple, but about the room it has overtaken. This post is not about what’s next, but about the realization that if we’re not deliberate about what habits we pick up, and what ideas we celebrate, we end up giving inordinate amounts of attention to the wrong abstractions. Rooms become useless when overtaken by objects - any object. Here’s to unlearning things.